1861 – January 28 – The first Episcopal service is held by Bp. Whipple in the courthouse in Albert Lea.

1870 to 1876 - Occasional services held in the courthouse by the Rev. George Tanner (from Owatonna) and the Rev. R.S. Hurleson.

1876 - January 1st - the Rev. R.R. Goudy was put in charge of services in both Austin and Albert Lea. Bp. Whipple designates Albert Lea as an informal, unincorporated mission called the Church of the Good Shepherd, which continued to meet in the courthouse. We count the founding of our parish from this date.

1877 – April 17 - The first Episcopal confirmations were held in the Presbyterian Church by Bp. Whipple. Thirteen people were confirmed.

1878 – November - The first vestry was formed and a petition signed to organize a formal parish in Albert Lea. The Bishop consented on November 21.

1885 – August 1 - Rev. R.R. Goudy moves from Austin to Albert Lea to be full time in charge of the parish. The parish loses the Congregational property due to mortgage failure. Rev. Goudy proposes to build a church at the corner of Park and Grove Avenues.

1886 – October – The foundation is laid for the new church building.

1887 – March 3 – The new church building is consecrated as Christ Episcopal Church. IT was one of the first (if not the first) church in Minnesota to have electric lighting.

1953 – Property at 204 W. Fountain St is purchased and the home of Pat Hall is demolished for a new church building.

1967 – An educational wing is added to the original structure.

1968 – The new educational wing is dedicated. 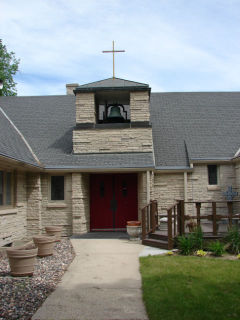 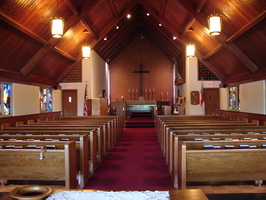 by a layperson with a homily;

Holy Eucharist is led by our Priest in Charge.

Both services include hymns and we hope you will join us and add your voice to ours.